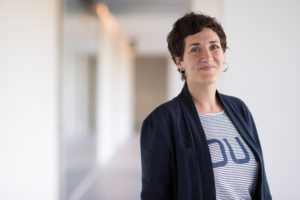 She works on climate change adaptation, risk and decision-making under uncertainty. At the Grantham Research Institute, her work is focused on developing a risk-assessment framework to support successful adaptation strategies in coastal cities. Elisa has a background in Science (BSc. in Geological Sciences, 2001) from the University of the Basque Country and a Master’s degree in Environmental Engineering and Management at the School of Industrial Organization in Madrid (2002).

After working for an industrial business group, in 2005 she was appointed Director of Biodiversity of the Basque Government. During this stage, she developed a strong interest in the science-policy interface, so in 2009 she enrolled in a doctoral programme on Quaternary and Environmental Change studies.

In 2010 Elisa joined BC3 where she developed her PhD on the environmental and economic impacts of sea-level rise in the Basque Coast. While working on her PhD, she has also been involved in several research projects related to the economics of climate change adaptation.